A Clarification of Geomancy for Golden Dawn Students 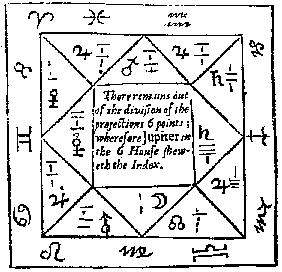 I have found it necessary to write this clarification for students of the Golden Dawn who were, like myself, initially baffled by the Order's system of Geomancy. The instructions given to the Zelator can be confusing without first understanding a few key points. In fact, these key points are very simple, and they transform Golden Dawn Geomancy into a logical and pleasantly workable system of divination. As these points are missing from the traditional instructions, this essay will provide a supplemental introduction to the practice.

It is my current impression that few students have trouble understanding the initial steps in the Geomantic process. We know that one must first conjure the proper Planetary Spirit as the source of the divination. (If knowledge of conjuration is lacking, there is plenty of material geared toward the art available to the student.) We also know that we must use a method such as squilling (poking holes in earth, also called “sewing“) or coin tossing to determine sixteen instances of "odd or even.". These sixteen odds/evens are then used to create four Tetragrams (four-fold figures) called Mothers. Finally, the Mother Tetragrams are used in a logical fashion to produce four Daughter Tetragrams, four Nephews (or, traditionally, Nieces), two Witnesses and a final Judge. (For complete instructions, refer to "Self Initiation into the Golden Dawn Tradition" p. 175-180.)

The Tetragrams can be used in various ways for simple readings. The Witnesses and Judge, especially, can provide a quick answer to a question. The Judge represents the “final answer”, and it is directly modified (toward good or ill) by the two Witnesses. (The previous 12 figures are used for advanced Geomancy- which we will cover shortly.)

It is also possible to perform a short reading for yes/no questions, using only one Tetragram. (Therefore, it is only necessary to sew four lines of odds/evens rather than sixteen.) Beforehand, decide on the question and which Planet properly rules the question. Conjure the related Planetary Spirit as usual, ask the question, sew and create the Tetragram. The answer depends primarily on the figure’s Planet:


(* Northern Node: Surprise or something hidden.
Southern Node: Emphatic no!)

This only changes if the Planet that rules the question comes up. In such cases, the answer is an automatic “Yes.“ For example, assume you ask if a certain person means you harm, and you sew a figure of Mars (Rubeus or Puer). Mars generally means “No“- except in this case the question is governed by Mars. Therefore, the answer will be “Yes.”

Also keep in mind that the general interpretation of the Tetragram itself can be important. For instance, if the figure sewn for the above example question were Rubeus (Mars in Scorpio, indicating evil in all that is good, and good in all that is evil) the answer would be a more emphatic “Yes!“ than Puer (Mars in Aries, generally bad but good in love and war).

As another example, let us assume you desire to join a group, but wish to know if the path is correct for you. I would suggest conjuring the Spirit of Mercury (which rules Gemini in the second House- brethren, neighbors, etc). Let us assume you then sew the Tetragram of Via (Way) - ruled by Luna in Cancer. Luna would generally indicate “Maybe”, but in this case Via indicates a path taken alone, and thus likely indicates one should not join the group. On the other hand, if the other Luna/Cancer figure were sewn- Populus (People)- it would likely indicate that you should join the group. In either case, the answer is less than emphatic.

On the other hand, if one of the Mercury figures were sewn, the answer would be an automatic “Yes” because we are asking Mercury. Albus (White) would be a general affirmation. Conjunctio (Conjunction, Joining) would be a fairly emphatic “Yes, join this group!”

As previously stated, students do not appear to have much trouble with the above concepts. Reading Tetragrams in this fashion is not unlike a Tarot reading, especially if one is used to considering the astrological correspondences of the cards. There are very simple rules to follow in general, but it is largely an intuitive process.

Where students tend to stumble is upon encountering the "square astrological chart" used in more advanced Geomantical readings. Not only is the significance of the chart unclear, the instructions for applying the Tetragrams to it appear entirely random. It seems counter-intuitive, and that (I fear) is where many students choose to leave Geomancy behind. In what follows, I shall de-mystify the advanced method of Geomantic divination and make the instructions crystal clear.

For my second departure, I will forego the "square chart" entirely. That style of chart was the norm in the medieval and renaissance eras (when most Geomancy texts were written), and it is retained in modern Geomancy only by tradition. Unfortunately, I suspect the appearance of such an alien device is responsible for many students' aversion to the system. However, for all practical purposes, there is no difference between the old square chart and the modern round version. (Except, in my own opinion, the round chart is much easier to understand, and better shows the relationship of planetary aspects.) Of course, Golden Dawn students will need to use the square chart for their tests; however, for the purpose of this lesson, we will be sticking with the modern round chart. Because the two versions are practically the same, the student can easily take the info from a round chart and copy it onto a square chart when necessary. 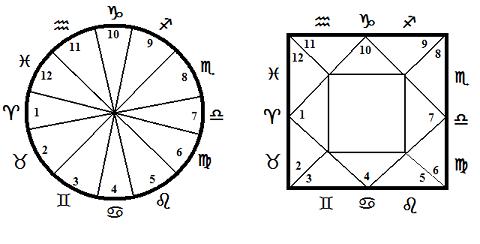 We find the traditional method of Geomantic divination in pseudo-Agrippa's "Fourth Book of Occult Philosophy", in a section entitled "Of Geomancy." This text is actually a reference manual- explaining how to place the figures onto an astrology chart, and providing the divinatory meanings of each of the sixteen Tetragrams according to the twelve astrological Houses. It is an invaluable resource for any Geomancer, and I suggest even Golden Dawn students obtain a copy. Meanwhile, we will here focus upon its instructions for placing the Tetragrams onto a chart.

To begin with, it is important to understand that the figures are applied to the chart according to the twelve astrological Houses. The Signs and Planets on a chart are always in motion- rotating clockwise around the center- so they will be in different positions for every chart created. Meanwhile, the twelve Houses are fixed. They are actually portions of the sky- as viewed from the surface of the Earth- through which the Signs and Planets pass each day. (The stars rotate 360 degrees around the chart- one complete circle- every 24 hours.) 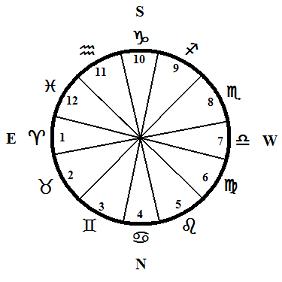 For the interpretations of these Houses, see "Self Initiation into the Golden Dawn Tradition" p. 130-135. For now, it is only important to know that the Zodiacal signs you see in the above diagram are those which naturally rule those Houses. (Even though each Sign will pass through all 12 Houses during a day.) Therefore, the first, fourth, seventh and tenth Houses are Cardinal Houses, because they are naturally governed by the Cardinal Signs (Aries, Cancer, Libra and Capricorn). They are also called the four Angles, because they fall directly upon the four points of the compass. The four Houses governed by the Fixed Signs (Taurus, Leo, Scorpio and Aquarius)- the second, fifth, eighth and eleventh- are called Succeedents, because they follow directly after the four Angles. The final four Houses- the third, sixth, ninth and twelfth- are all governed by the Mutable Signs (Gemini, Virgo, Sagittarius and Pisces), and are called the Cadent Houses.

It is this ordering of Houses- Angles, Succeedents and then Cadents- that is used to apply the Geomantic Tetragrams to the chart. Also keep in mind that while the Houses run from one to twelve counterclockwise around a chart, the Signs and Planets move through them in a *clockwise* rotation. Therefore, since the Tetragrams represent the Signs and Planets, they are also applied to the chart in a clockwise direction. 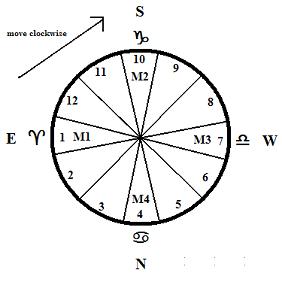 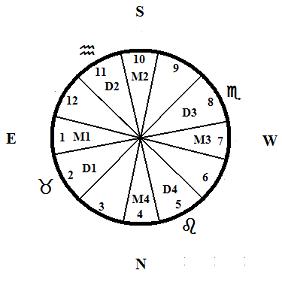 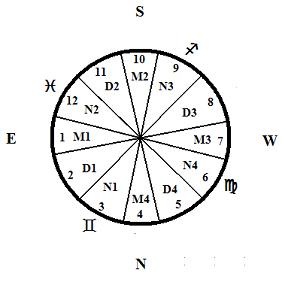 To serve as an example, let us assume the following chart has been created using the above methods: 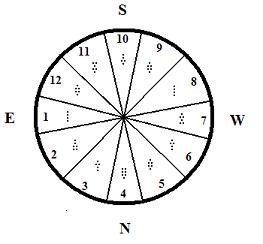 Now that we have placed all twelve of the principal Tetragrams onto the chart, it is time to transform them into something we can interpret. To do this, we have to consider the first Mother, which was placed in the first House. This position on a zodiacal chart is called the Ascendant, because the Sign that is passing from the first into the twelfth House is actually rising upon the eastern horizon. In medieval astrology the Ascendant, rather than the Sun Sign, was considered the most important aspect of a chart.

To find the Ascendant of a Geomancy chart, we only need to know which zodiacal sign is represented by the first Mother. In our example, the figure called Via is found in the Ascendant. This figure represents the Planet Luna which rules the constellation of Cancer. Therefore, we know that Cancer is the Ascending Sign in the first House. We can then apply the remaining eleven Signs around the chart in proper order (moving counterclockwise, and paying no attention to the other Tetragrams): 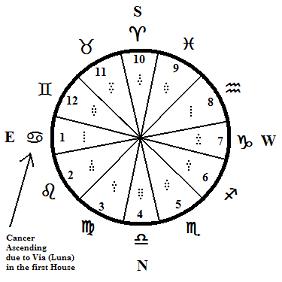 Once the Ascendant is thus established, we can focus upon the Tetragrams' primary correspondences- the Planets. Simply replace each Tetragram on the chart with its associated Planet (or Lunar Node): 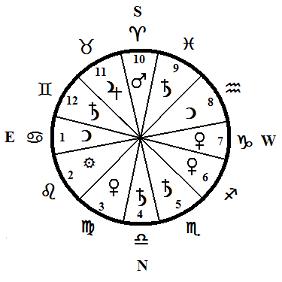 At last, we have a chart we can interpret just as we would any astrological chart. Of course, in a normal chart the Planets and Lunar Nodes would only appear once each, and several Houses would be left empty. In the case of a Geomantic chart, any Planet might appear multiple times, and every House will have a Planet or Node in it. However, this makes no difference to the standard methods of reading an astrological chart. It is most important to interpret the Houses according to the Signs and Planets that fall within them- paying special attention to the House that governs the question at hand.

(Golden Dawn students beyond the Grade of Zelator, or with previous astrology experience, may continue to interpret Planetary dignities, aspects, etc. Zelator students will encounter such advanced astrology in Theoricus and beyond. Again, I strongly suggest one obtain a copy of pseudo-Agrippa's "Of Geomancy" for its interpretations of each Tetragram in the twelve Houses. Also see "Self Initiation into the Golden Dawn Tradition" p. 180-192.)

All that you have read so far applies as well to the Golden Dawn system of Geomancy- with two very simple changes. First, the Order tends to associate the system more closely with Elemental Earth than with the Stars. Therefore, it does not place the same emphasis on the Ascendant as we see in the older method. Instead, the emphasis is moved to Cardinal Earth by placing the first Mother Tetragram in the tenth House (naturally ruled by Capricorn). Second, the Golden Dawn chooses to place the figures *counterclockwise* around the circle, so as to match the sequence in which the twelve Houses are written around the chart.

Otherwise, we still use the familiar pattern of Angles, Succeedents and Cadents to position the Mothers, Daughters and Nieces: 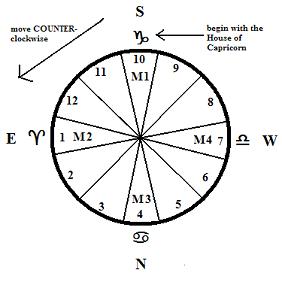 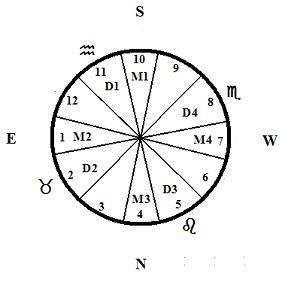 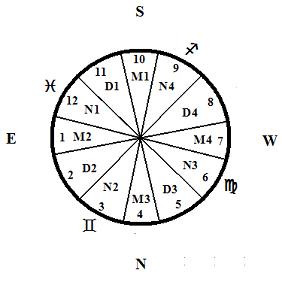 Once the twelve Tetragrams are in place, the procedure is the same as before. The figure in the first House will indicate the Ascending Sign, and the other Signs are added to the chart (moving counterclockwise) in their proper order. Then, all twelve figures are converted to Planetary symbols and the chart is interpreted as usual. (Afterward, one may convert the chart to the square form.) 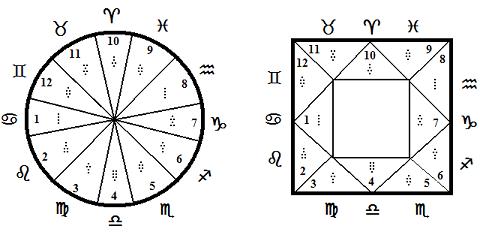 There are, of course, many subtleties involved in advanced Geomantic divination that are not covered in this short clarification. This paper is intended for beginners, so the basic concepts behind creating a Geomancy chart might become clear. The interested student is encouraged to continue their studies of Geomancy in both the Order's material as well as medieval texts like "Of Geomancy" and others.

-Frater VPL, for his post on Golden Dawn Geomancy
(http://groups.yahoo.com/group/solomonic/message/4047).